What better subject to talk about on New Year's Eve than my coin collection? I think I mentioned it on here a little while ago - I own a "collection" of 14 interesting coins that I've had since I was little and recently rediscovered among all my old junk while in the process of moving house. Most of the coins were sent to me by some relative, probably Auntie Cath, perhaps with the intention of starting me off on a fascinating hobby or perhaps because she had a house full of old coins and had run out of other presents to send to her numerous nephews.

Anyway, last night there was a Simpsons episode on Sky involving a coin collection (they really have run out of interesting plots for the Simpsons, haven't they?) and it inspired me to wonder 'did they make any coins with Edward VIII on them?' And since when I get a thought like that I can't sleep or do anything else until it's resolved to my satisfaction, I turned to the internet to find out. Luckily, I quickly came across this excellent website that gave me a quick and interesting answer - they did, but they were waiting for the coronation to issue them, so they never came into circulation - and motivated me to do what I'd been meaning to do for at least twenty-something years, and find out for certain whether that 1806 penny, the oldest coin in the collection, was actually a penny or in fact a halfpenny. Weirdly, coins in those days all look the same and don't say on them how much they're worth. I would think this would have been confusing. Still, it turns out that mine is a penny, like I've been saying it was all along, which is nice.

Here are the coins, scanned for your fascination: 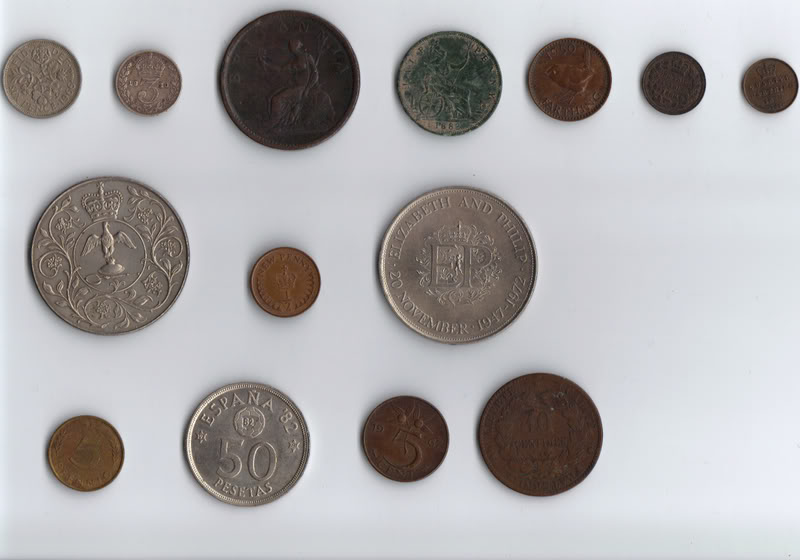 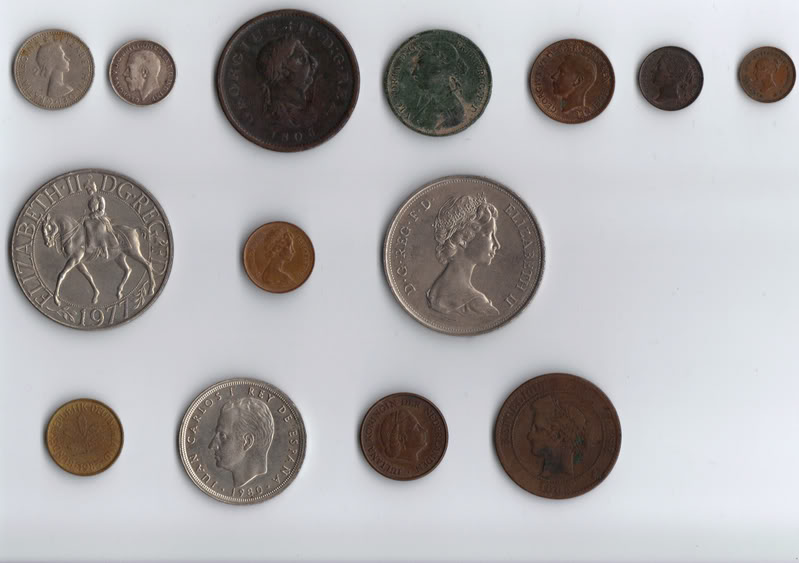 Left to right, top to bottom:

1966 sixpence - haha, all the sixes. I think this one wasn't part of the "collection" I was originally sent, but was one of the old coins my dad had around the house. They were mostly old pennies, but there was the occasional interesting one, like this. Young-looking Queen Elizabeth II on either the obverse or reverse, I can never remember which is which.

1920 silver threepenny - this is a rather cool one. George V on the back, and I always think a beard looks good on a king. William should grow one, it'd make him look much cooler. Charles is a lost cause, even if he does end up becoming king in the end. Anyway, I remember my dad also having one of the big twelve-sided threepences, but I never saw fit to add that to the collection. There's an old Oor Wullie comic strip where he thinks he's found a half-crown but it turns out to be a silver threepenny (worth a tenth of a half-crown) under a magnifying-glass - that's the kind of plotline that you just can't do with modern coins.

1882 half penny - added to the collection from my dad's old pile of coins because it had gone a really weird green colour. I'd love to know what this coin has been soaked in at some point in the past. You can just about make out Queen Victoria.

1950 farthing - George VI on one side, a cute little wren on the other. Farthings were cool. By 1950, what with post-war inflation, they weren't being used much any more, but they kept minting the things until 1956, apparently. Useful fact learned from that website - until 1949, coins had 'IND IMP' after the 'FID DEF' bit, but then there was that whole Indian independence thing so they had to change it.

1868 third-farthing - Worth a twelfth of an old penny, and a really titchy little thing. That website isn't clear on whether they were ever in common use in Britain itself, but they were introduced for Malta, which used British currency but had previously had coins worth such a tiny amount.

1852 quarter-farthing - Probably the tiniest coin in the universe, and apparently only used in Ceylon, where the cost of living was REALLY cheap. I think this is an extremely groovy coin to have.

1977 crown - This one was a special issue for Elizabeth II's silver jubilee, and it's something that's belonged to me since I was a tiny little baby. Awwww.

1975 decimal half penny - I remember when these were still legal tender. And when things were cheap enough that you could actually need a half penny. I'm old.

1972 crown - Elizabeth and Philip's 25th wedding anniversary. Don't remember where this one came from.

1985 five pfennigs (Germany) - I've got a few obsolete European coins too. It's good to remember those days before the euro. No king or queen on this one. Bring back the Kaiser, that's what I say.

1980 fifty pesetas (Spain) - A commemorative World Cup 1982 coin, minted two years before the World Cup. They'd have felt really stupid if the World Cup had been cancelled for some reason.

1967 five cent (Holland) - I know nothing at all about Queen Juliana. I should find out what she was all about.

1885 ten centimes (France) - I should try to find some more modern francs and centimes, to remind me of those school trips to France back in the late eighties. Nineteen-eighties, that is. I'm not THAT old.

So yay, groovy coins! I'm almost fascinated enough by the aforementioned website to start collecting the things seriously, but collecting anything nowadays is just a matter of typing into the internet what you want and buying it. Which is no fun at all. I suppose I could get a metal detector and only collect coins I dig up for myself, but I think I'd probably be better off just giving away my collection to some bright-eyed, less jaded young budding numismatologist. Do any young people read this blog? If you do, drop me a line and I'll give you some coins!
Posted by Zoomy at 8:51 pm