Thanks to the ability to memorise long numbers! 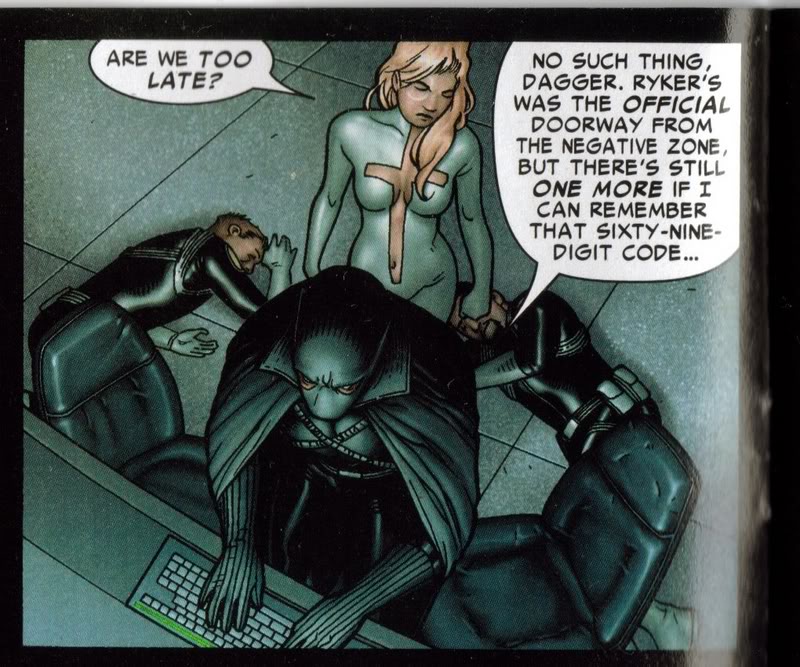 From this week's Civil War #7, which was okay if you like that kind of thing. The series as a whole has been very entertaining, although it's been more interested in big fight scenes than exploring the possibilities of the very original storyline. I would have preferred a better artist, too. But it's done its job of establishing a new status quo for the Marvel Universe, and some of the upcoming series spinning off from Civil War look like being fun (Dan Slott writing "Initiative" is sure to be brilliant). Almost makes up for Thunderbolts, Exiles and Runaways losing their writers and becoming in two cases at least (Joss Whedon's Runaways hasn't started yet) absolute rubbish. I'm a bit disillusioned with Marvel comics as a whole at the moment.

But more importantly, it makes me giggle to think that we're supposed to take his recall of a 69-digit number as further proof of the Black Panther's genius. Any old eejit can memorise 69 digits with a bit of practice! Really, boasting about something like that just shows what an insecure person he is (although you could maybe have guessed he's a bit strange by the way he wears a mask with little cat-ears on top).

Anyway, I've had enough of rain and not writing books. I've decided to have a holiday in Las Vegas after all. I really do think the change of scene will help me churn out a bit of writing, and I want to see that Cirque show with Beatles music.
Posted by Zoomy at 8:27 pm